A Serial Killer and Canada’s Indifference. 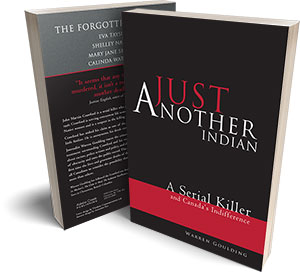 Indigenous women in Canada have been the victims of violence for decades. Mostly, the horrific crimes have been ignored, the victims and their families silenced by indifference and racism.

Before there was a national inquiry into this national scandal, before it was revealed that thousands of First Nations, Métis and Inuit women had been murdered or were missing, journalist Warren Goulding exposed the sad truth behind the killing of four women in Saskatchewan and Alberta.

Just Another Indian: A Serial Killer and Canada’s Indifference raises troubling questions about the police investigation into these chilling crimes and asks why the media and mainstream society chose to look away when this largely marginalized sector of the population was under attack.

Their killer, John Martin Crawford, committed unspeakable acts on these four vulnerable women. Were there other victims?  Read Chapter One. . .

An award-winning non-fiction book, Just Another Indian has been praised for laying out for public examination how systemic racism is alive and well in Canada.

To say the book is powerful, riveting and often shocking would be putting it mildly. It raises the question of what kind of value we put on human life.

Order Your Copy of this Canadian bestseller $30.00 CA (covers GST, shipping and handling) 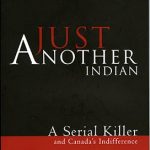