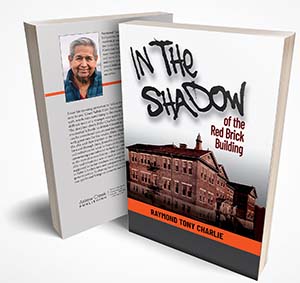 Six decades after enduring unthinkable abuse at the hands of priests at Kuper Island Residential School, Raymond Tony Charlie is telling his story.
His recently released book, In the Shadow of the Red Brick Building, exposes the physical, emotional and sexual abuse, but also carries a message of resilience and recovery.

“It took me a long time to write this book,” Charlie explains of his more than eight-year journey to get the book published. “There were a lot of stops and starts and sometimes it was very difficult to write.”

Charlie, a member of the Penelakut Tribe, attended Kuper Island Residential School and another school in Mission B.C. in the 1960s. Other members of his family also attended the residential schools operated by the Catholic Church and other churches in Canada for more than a century.

He says the Charlie family was deeply affected by their experiences at the school.

“Many issues we have as a people today have been brought onto us directly as a result of the residential schools we attended across Canada,” he says.

“I lost our beautiful language because my late mother chose not to teach us because her generation was punished for speaking it at the residential school.”

Now a respected Penelakut elder who speaks to schools, men’s groups and organizations, about his residential school experiences and his healing journey, Charlie has seen first-hand the lack of family structure, loss of language and culture, alcohol and drug abuse, sexual abuse and other impacts the schools caused over more than a century.
“All the boundaries I lived with at the residential schools became a large part of my life. I unknowingly carried them with hardships most of the time,” he explains.

“In some ways I became developmentally delayed from the point of abuse from these brothers who were my supervisors at these residential schools. I was literally a bruised lost soul, indecisive and insecure within myself.”
Charlie was one of the 28,000 victims of residential school abuse who received a cash settlement from the Government of Canada.

But not only was the settlement meagre in his case, the process and the criminal cases involving one of his abusers failed to bring closure.

“I will point my finger directly to the Government of Canada for this huge loss, as well as the Catholic Church who stood idly by doing nothing to assist survivors. They had enforced the harsh policy of Canada. The richest church in the world has made no efforts to assist healing to survivors for all the sex and physical abuses they inflicted to children at residential schools they operated.”

Counselling and family support helped Charlie gain control of his life, but it has been a difficult life from an emotional and physical standpoint.

“Even though I had a hard time most of my life as a survivor, I want to love and cherish what time I have left on this earth. I don’t want to be a bitter and angry old man; it’s not my thing. Life is too short for this kind of situation to hold me in its grip.

“I will no longer lower my gaze. I will keep my head up as a proud First Nations man. I have no more guilt or shame.”